Is your yard infested with grackles, pigeons, crows, or house sparrows?

Do you have problems with urban birds that dive bomb your garbage cans and molest the cat? Are the songbirds you want to see nowhere to be found?

All birds need food, but some birds won’t become a part of your landscape without a birdbath.

Which birds benefit most from birdbaths?

Some birds, such as catbirds, wrens, and waxwings, find their own fruit and insects and won’t visit your feeder.

But they will visit a birdbath.

Other birds, like robins, will take their fledglings to your birdbath because it is a safe and dependable source of water.

They will guide their young birds in flight to make sure they know where your birdbath is and how to drink from it.

And some birds seem to come out of nowhere once you put up a birdbath. You may go months without seeing bluebirds, but if they are nearby, they will visit your birdbath within minutes of your setting it up.

Scientists in Australia recruited 992 citizen scientists to spend four weeks at a time watching their birdbaths. They kept track of the kinds of birds that flew in for a visit.

They will fly into your yard whether you have birdbaths or bird feeders or not. Smaller birds won’t stand up to the bigger bird bullies unless you give them a reason.

The smaller, more desirable songbirds and flower feeders need just the right conditions to show up around your home. If you want to see more of the birds you like and less of the birds you don’t, you need to put in a birdbath.

10 Tips to Attract Birds to Your Bird Bath

Crows may show up in your yard if you put out a kiddie pool. Grackles may congregate around your swimming pool. Pigeons may land on your lawn if you forget to turn off your garden hose when you are watering your petunias.

Desirable songbirds are picky about their birdbaths.

They won’t take the risk of exposure to predator birds and cats for a birdbath that doesn’t meet their needs.

Here are 10 ways to make sure you are attracting desirable, smaller birds with your birdbath.

Small birds don’t bathe in deep water. The depth of water in your birdbath should be 2 inches (5 cm) or less. 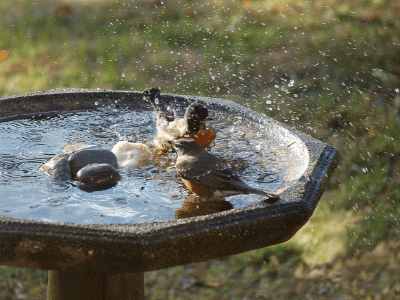 This is the perfect depth for songbirds to splash around and take a swim.

If your birdbath is deeper than 2 inches, there’s no need to get rid of it.

Just place a few flat stones in the bottom or pour in some pea gravel.

The standard birdbath comes mounted on a pedestal. That makes it a pleasant landscape feature for humans, but it’s not what birds look for in nature.

Birds in the wild bathe in water at ground level.

Ideally, you should place your bird bath on or no more than a foot above the ground.

However, if you have a problem with slugs that drown in your birdbath or pets that confuse birds with tasty snacks, it’s OK to keep your birdbath on a pedestal

Give birds a good footing

Even if your birdbath is just 1 or 2 inches deep, it’s still a good idea to put some large stones or pea gravel across the bottom.

This gives birds a better footing while they are using the bath.

Many birdbaths are made of glazed ceramic. The glaze looks great, but it’s slippery for the birds.

Make your birdbath more bird-friendly by providing birds with some traction for their toes.

Some places in your yard will be better for your birdbath than others. One thing to think about is being able to see the birdbath.

You need to keep your distance from the birds. This way you don’t scare them away.

The birdbath needs to be visible from wherever you plan to be watching it.

It also helps to place your birdbaths within easy reach of a grounded electrical outlet.

Birds are attracted to moving water. You’ll need to plug in your recirculation devices unless you get a solar-powered birdbath.

If you go solar, then you need to make sure your birdbath gets enough sun.

It’s also helpful to have access to electric power to keep your birdbath heated in the winter.

The idea of “cover” for a birdbath is commonly misunderstood. “Cover” is for the birds, not for the birdbath. (There are plastic and canvas covers for birdbaths for when you want to keep birds away.)

Tiny songbirds have their own predators, so place the bath near cover in case the songbirds are discovered by hawks or owls.

The kinds of cover you can provide for birds at your birdbath include:

If you live in any of the hot-summer areas of the United States, the summer heat can be broiling.

Birds are much more likely to be able to use your birdbath to cool off if you place it in a dappled shade.

A birdbath should be placed where birds can find it, so deep shade is not a good idea. Morning sun with afternoon shade is ideal.

If you would like to make your birdbath more approachable for “shy” birds like woodpeckers, warblers, thrushes, and tanagers place a stick or a rod about 1 inch (25 mm) away from the edge of the birdbath.

Birds can use it for a perch.

Birds use their perches as a place to preen their feathers after they take their bath.

They also use it as a platform to survey their surroundings for danger. Don’t place the perch directly over the birdbath because birds will use it not just as a bathing perch but also as a bathroom perch.

Sticks, feathers, leaves, insects, and bird droppings, along with a long list of other things, can accumulate in the water of your birdbath.

Plan to scrub out your birdbath with an abrasive cleaner and a brush every two or three weeks. Bird poop can carry infectious bacteria and fungi, so wear gloves.

Be sure to rinse out the birdbath thoroughly and replace the water each time. Birds will be more enthusiastic about their birdbath when it is freshly clean.

Keep it open all year

To keep a supply of drinking water available for birds, consider using a temperature-controlled water heater. This is a smaller version of the kind of outdoor water heating unit used to keep cattle troughs ice-free.

You don’t need to keep the whole birdbath ice-free. Just one small area is enough. Birds won’t be bathing in freezing weather.

Don’t forget to use an outlet equipped with a ground fault circuit interrupter (GFCI). This prevents electric shock from traveling through wet ground.

Moving water attracts birds to your birdbath. It sparkles in the sunlight, but in a way that birds find attractive.

You will have a lot more birds coming to a moving-water birdbath than if the water is still. And your birdbath won’t be a breeding ground for mosquitoes if the water in it keeps moving.

There are several ways you can keep the water in your birdbath moving.

One final suggestion: Don’t be afraid to decorate your birdbath.

Bright colors can make your birdbath a more interesting feature in your landscape. Birds are attracted to them.

A solar-powered nighttime center light makes birds visible after sundown and attracts many of the insects on which they feed.