Owls are fascinating creatures and if you, like me, live in metropolitan cities you can rarely spot them.

The only time we are reminded of owls is in horror movies where their howl or screech is used to make the atmosphere scary.

To watch and experience this magnificent creature you would have to go to the countryside or national forests.

There are a lot of folktales regarding owls and most of them connect owls to wisdom, cosmic experience or witchcraft, and dark forces.

Owls have become famous ( and rightly so) due to fictitious characters written about them in best sellers such as Harry Potter etc.

Allow me to deliver to you tantalizing facts about this awesome creature that lives on our planet and in almost every place of the world except Antarctica and some remote islands!

Owls are beautiful creatures that hunt mostly at night. Except for a few that live in areas towards the north pole that compensate for short nights and hunt during the day.

They are also called ‘crepuscular’ meaning active during the daytime.

Owls have more than 250 varieties among themselves. The diversity is unique as they have different shapes and colors in different parts of the world.

According to the region, they hunt different types of prey.

The Owls are classified under a group of birds known as Strigiformes. The oldest fossil of the owl, Ogygoptynx, is found dating back to 61 million years ago. It is believed that their existence began just after dinosaurs like T-rex went extinct.

The most common species found throughout America (North and South) is the Great Horned Owl.

2. You Can Recognise Owl by their Facial Appearance

Whenever you want to identify the owl, use the simple trick of facial recognition.

The owls are part of the Strigiform group of birds and can be further divided into two families- the ‘Tytonidae’ and the ‘Strigidae’. 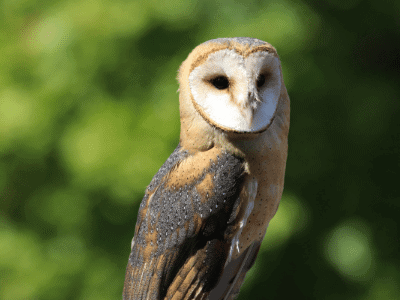 Although the Owls are different in appearance, they all have great night vision, sharp claws, and feathers that move silently into the night.

3. Owls Make Different Sounds (based on the species)

The most famous feature of the Owls is the sounds they make. All horror scenes in forests are incomplete without the screech or hoot of an owl.

What is especially interesting is that owls make different sounds according to their species.

The eastern screech owl makes a horse-like sound. The Tawny owls make a “twit-two” sound while communicating with each other.

4. A Group of Owls is Called a ‘Parliament’

Yes, you read that correctly. A group of owls together is called a parliament.

Not because they make legislation or anything, this name was accepted after author C.S Lewis coined the term in his famous tale “the chronicles of Narnia”. 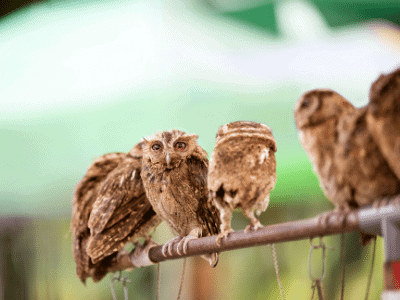 With 100 million copies of the movie sold internationally, the gathering of Owls was accepted globally as a ‘parliament’.

Backing this coined term is a lot of folklore that considers owls are worldly-wise and smart.

Another tale that helped accept this concept is the ‘adventures of Winnie the pooh’ where an owl was considered wise by all.

The largest owl according to Guinness World records is Bubo bubo- An Eurasian eagle owl. 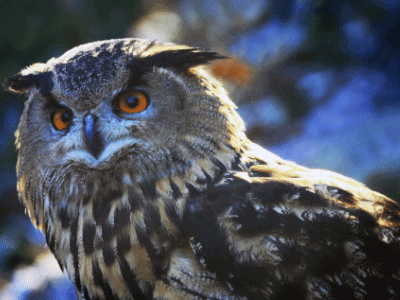 The Eagle Owls eat big animals like foxes and small deers and anything that moves. Rats and mice are not much of a meal and do not fill their stomach completely unless eaten in large quantities.

They have a unique characteristic of moving silently while flying. The Eagle Owls will eat anything. They don’t mind eating fish-eating owls of the same size. This Owl really likes to eat hedgehogs.

Another endangered owl species that also competes with its large size is the Blakiston fish owl. It sports the most colorful feathers.

It is found in Japan, China, and Russia and is also termed under ” the rarest owl” of the world.

The smallest owl is found in the Chihuahuan and Sonoran desert regions of North America. 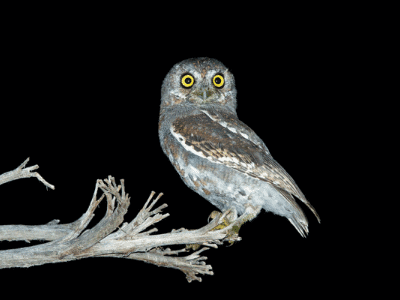 It is called the ‘Whitney Elf’ Owl and is a mere five inches in length. Due to its desert location and small size, it does not hunt small mammals but instead feeds on small insects like beetles, moths, crickets, and other insects.

It also adds fruits and seeds as a part of its diet.

This Owl prefers to stay in burrows of cactus that are made by woodpeckers. Another small owl called the ferruginous Pygmy owl also makes its nest in the cactus.

The ears of the Owl are placed asymmetrically and because of this reason, they have a fabulous hearing. 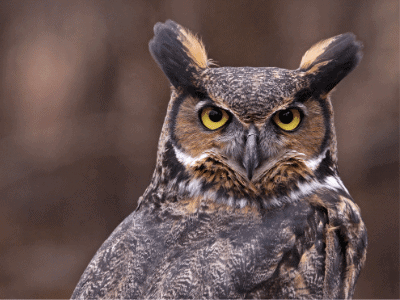 Asymmetrical means that their ears are located at different heights on the sides of their heads.

Due to this characteristic, they are able to detect sound vibrations on a large range of frequency levels. This ability gives them the power to hear even the slightest sounds very clearly. Any disturbance including rustle of fallen leaves would be picked up by them astutely.

The flat face of an owl also helps them to hear well as the sound is directed into the ears easily.

All birds of prey including Owls have large claws called talons located on their feet.

These claws help the Owls to perch on a branch and to catch their prey and tear it apart. The grip is ten times stronger than a human grip.

These are razor-sharp and four in number on each foot. They are the first strike weapon used by Owls to hunt. Being zygodactyl, each foot of an Owl has two forward-facing and two backward-facing toes.

The claws or talons of an Owl have the unique feature of being controlled by a joint that can reverse the toes. This way the Owls can swivel a toe front to back.

This characteristic is an important tool in Owl’s survival. It helps them to firmly catch hold of the mammal prey and also helps the owl in securing a strong footing on the branch of trees.

9. Owls Have Unique Eyes (and no eyeballs)

Eyes are the biggest and most beautiful feature on the owl’s face. 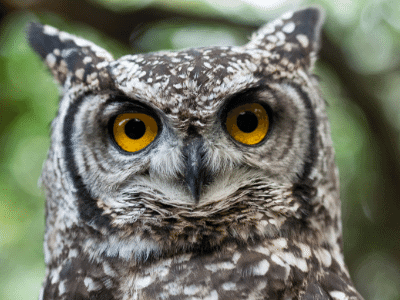 The round and tubular-shaped eyes can focus on prey from a long distance. The large surface of the eyes helps them to pick up a wide range of light rays.

They do not have a very good color vision but they have amazing night vision.

The owls do not have eyeballs. The sclerotic rings which are bony structures fix the eyes inside the skull and hold them in position.

Behind their eyes is a layer of tissue called ‘Tapetum Lucidum’ that roughly means ‘bright tapestry”. The tissue acts as a retroreflector meaning ‘mirror’.

The eyes are farsighted and can see quite well in low light. They are forward-facing and have binocular vision.

A baby Owl is called an Owlet. Owls are fiercely protective of their young ones. They attack mammals, birds and even humans who they believe pose a danger to the owlets. 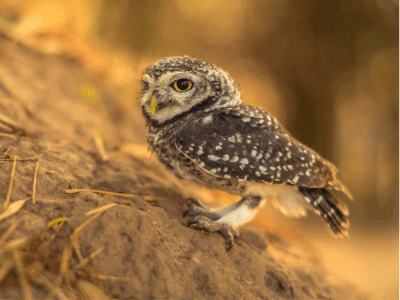 Owlets are mostly found in burrows and nests and hardly leave. Occasionally they roam around branches nearby to strengthen their wings.

They depend on the parents for food in the Owlet stage. Once its plumage has fully developed, they turn self-dependent. Most owl species live alone once they mature although some species stay together for warmth and to protect themselves from predators by looking out for each other.

What they eat also depends on their species. For example, a barn owl usually eats rodents, rabbits, etc while an eagle owl can gobble up foxes and small deers. Some owls like the great horned owl eat smaller barred owls who, in turn, eat even smaller owls.

The elf Owl found in deserts feeds on insects like beetles and also eats fruits and berries.

12. They can Spin their Head

Since the eyes of the owls are forward-facing and are not eyeballs in the traditional sense, the limited viewing area is enhanced by a feature unique to Owls alone. 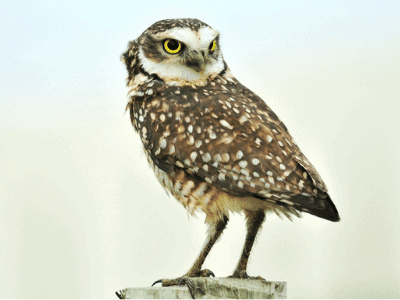 Owls can rotate their heads up to 270 degrees and can also look up and down at 90-degree angles without having to move shoulders. This way they can watch back, sides, and literally everywhere just like a surveillance system.

The ability to see everywhere makes them brilliant hunters and excellent flyers.

This may be one of the reasons why ancient traditions connected Owls to witchcraft and dark forces.

Scientifically, this is far away from the truth. Unlike humans, they possess a special blood pooling system that collects their blood for the eyes and the brain when the blood supply is cut off due to neck rotation. They also have an air-cushioned vessel casing to prevent rupture during violent head movement.

This is impossible in humans and can kill them and that may be the reason why for ancient civilizations, Owls represent death and devastation.

13. Owls Fly Silently and can Blend into their Surroundings

Owls have a unique ability to fly silently. Their feathers help to absorb and muffle sounds by breaking turbulence into smaller currents.

This feature makes them excellent hunters as the prey never comes to know when the predator owl is near.

Owls perch up really high on trees due to their excellent far-sighted vision and make themselves as inconspicuous as possible.

Their color and markings help them to blend well with the trees and burrows so they can be rarely spotted. They also have an amazing ability to make themselves larger or smaller to fit

Owls do not have teeth and cannot chew food. Once they catch the prey, they swallow it up.

As Owls cannot digest fur and bones, it either throws them out as pellets or removes the skin with talons before swallowing.

Hope you had fun reading the facts as I had, collecting them. Let me know in case you want more specific information regarding Owls. Stay safe.