Woodpeckers are a wonderfully diverse group of birds that can be found over almost all the world.

Most of us are only familiar with woodpeckers by their familiar pecking sound, but the dozens of species of woodpeckers differ in the colors of their feathers, in size, and in what they eat.

In this article, we’ll list the woodpeckers you are most likely to see and hear in North America.

Most woodpeckers feed on insects, but the acorn woodpecker, as its name suggests, also feeds on acorns. 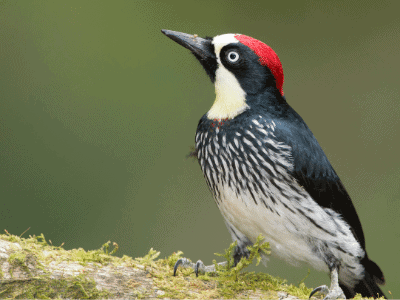 Ranging in the Western States of the USA wherever there are oak forests, acorn woodpeckers select “granary trees” in which they drill holes to store acorns for food later. A single tree may hold as many as 50,000 acorns.

The North American Breeding Bird Survey estimates that there are 2,000,000 acorn woodpeckers in the wild of the western US.

Most woodpeckers have four toes on each foot. American three-toed woodpeckers only have three. 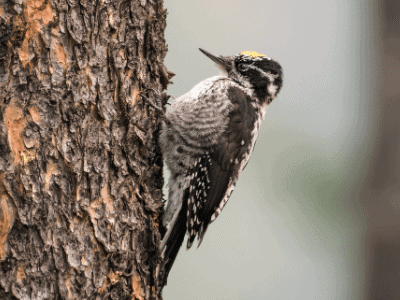 Ornithologists believe that the three toes spaced more widely on this woodpecker’s foot allow it to deliver a heavier strike when it is digging into bark for insects.

American three-toed woodpeckers are found in Alaska and the rest of North America west of the Rocky Mountains. They are occasionally found in the Upper Peninsula of Michigan and Minnesota. These woodpeckers excavate a new nest every year, usually following infestations of spruce beetles, their preferred food.

Some woodpeckers are recognized by the sound they make when they are pecking wood. 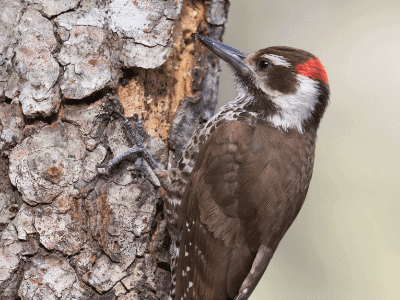 The Arizona woodpecker is recognized by its distinctive keech sound, and its rattle call of notes that go down the scale.

Black-backed woodpeckers feed on the larvae of beetles that grow in burnt-out trees after forest fires. Their black plumage is great camouflage against the charred trees when they are feeding. 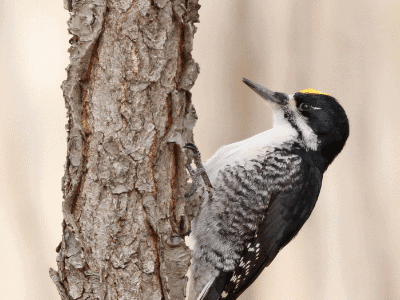 Unlike most other woodpeckers, black-backed woodpeckers also have three toes on each foot, giving them a better grip on charred wood. They prefer northerly locations in Alaska and Canada.

The chicks of the black-backed woodpecker are altricial, not completely developed when they emerge from their eggs. Both parents of the chicks take turns feeding them until they are ready to fly away at the age of 24 days.

Most black-backed woodpeckers spend their lives within a few miles of where they are hatched.

The North American Breeding Bird Survey estimates that there are 1,800,000 black-backed woodpeckers in the US and Canada, and that their numbers are increasing.

If you live in the eastern US or eastern Canada, chances are that you have seen a downy woodpecker. 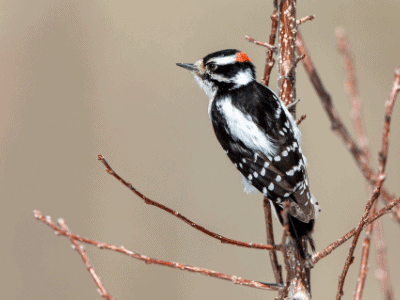 These small birds with white breasts, black backs, and a short bill like to come down from the trees to forage for insects in weeds and other plants that are close to the ground. They will fly back to the trees after they feed, making a distinctive sound of four taps in slow succession.

The National Breeding Bird Survey has counted 18,000,000 downy woodpeckers in North America. They are not an endangered species. Their numbers are increasing.

The Gila woodpecker is unusual in that it lives in living cacti rather than in dead trees. 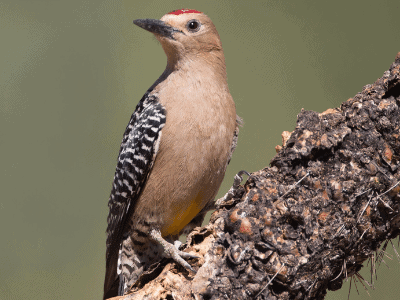 About 430,000 Gila woodpeckers are found in the desert of southern Arizona, where they can raise their young in the relative safety of saguaro cacti.

Gila woodpeckers are omnivorous. They eat insects like other woodpeckers, but they also feed on pollen, seeds, fruit, lizards, worms, eggs, and even the chicks of other species of birds. In Arizona, it’s not unheard of for Gila woodpeckers to visit hummingbird feeders.

The numbers of Gila woodpeckers are decreasing. The National Breeding Bird Survey estimates that there may be only 200,000 Gila woodpeckers in 50 years if their population continues to decline at the current rate.

The gilded flicker is an unusually large woodpecker, up to 11 inches (27 cm) tall, that lives in the same habitat as the smaller Gila woodpecker, in the deserts of Arizona and northern Mexico. 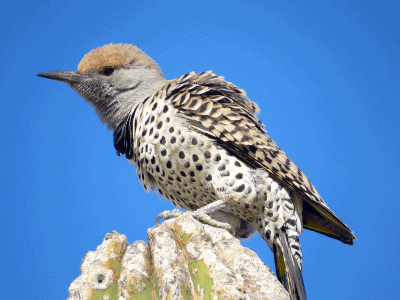 Its golden underwings distinguish it from the northern flicker, found in the same habitat, with red underwings.

Gilded flickers hollow out homes in saguaro cacti. Their excavations are large enough that the cactus secretes a resin to protect itself from water loss. The resin hardens into a “saguaro boot” with tough, protective walls for gilded flickers to lay eggs and raise their chicks.

Gilded flickers spend more time on the ground than most other species of woodpeckers. Numbering just 240,000 in the wild, they are a species of concern to conservation groups in Mexico and the United States.

Golden-fronted woodpeckers are a “zebra-backed” species that is common in Texas southward to Mexico, Guatemala, and Nicaragua. 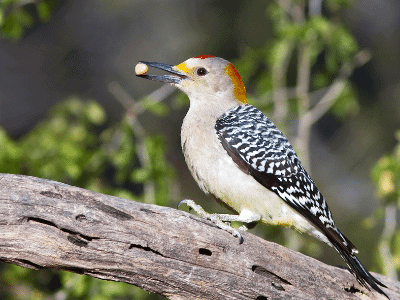 They are also found in extreme southwestern Oklahoma. These woodpeckers are famous for nesting in wooden telephone poles and wooden fence posts, cleaning out and enlarging spaces left to them by Ladder-backed woodpeckers.

They are found all over Texas, from the short palm savannah of the southern part of the state to elevations of almost 9,000 feet (2700 m) in the West.

They make a harsh churring sound in warm-weather months to mark their territory and to advertise for mates. The check, check, check (or chuk, chuk, chuk) sound is a warning to other woodpeckers that danger is nearby.

The rattling sound is a signal to the bird’s mate to come home to the nest. Golden-fronted woodpeckers don’t make loud sounds when they are drilling into wood.

The natural population of Golden-fronted woodpeckers has been devastated by pesticide use.

There are about 820,000 Golden-fronted woodpeckers left in the wild.

Hairy woodpeckers are found all over North America, from British Columbia to the Bahamas, from Alaska to Panama, and from sea level to elevations up to 11,500 feet (3500 m). These woodpeckers don’t just peck wood. They spend more time scaling bark off dead or dying trees to eat the moth or beetle larvae below it. Forest management experts estimate that hairy woodpeckers eat 95 to 98% of the destructive insects that would otherwise attack healthy trees. Hairy woodpeckers will also break pine cones to release their seeds and feed on sunflower seed from bird feeders.

The calls of the hairy woodpecker are especially easy to identify. Hairy woodpeckers greet each other with a wicka-wicka or rucka-rucka sound. They whistle when they are in distress. Their rattle, a jee-jee-jee-jer-jer sound, is their usual means of communication year round.

The National Breeding Bird Survey has counted 8,500,000 hairy woodpeckers in North America. Their numbers are increasing.

There have been no confirmed sightings of an ivory-billed woodpecker since 1944.

There have been no new photographs of ivory-billed woodpeckers since 1938. Even in the 1930s, this species was notoriously difficult to photograph, so it is possible that occasional reports it still exists are true.

Ranging from California to Texas, the Ladder-backed woodpecker is famous for making holes in oaks, pinyon pines, junipers, telephone posts, and fences. 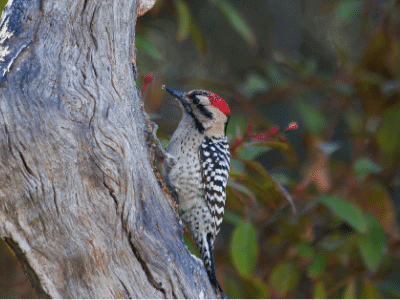 Ladder-backs like to chatter, but it has a distinctive one-note warning sound when it senses danger. They make a churring sound as their mating call.

Ladder-backed woodpeckers are sometimes referred to as “zebra backed” due to the dark and light stripes on their backs. The darkness of their plumage is highly variable. Although they are monogamous, they often mate with other kinds of woodpeckers.

Historically, Ladder-backed woodpeckers fed on the large, red ants common in their range in Texas and the American Southwest. They also feed on the worms that affect cotton crops.

Destruction of the red ants by fire ants and widespread use of pesticides has sent them back into the wild and away from farms and urban areas, but there are still 2,100,000 ladder-backs in the US and the National Breeding Bird Survey has been finding their numbers are stable.

In 1806, famed explorer Merriweather Lewis of the Lewis and Clark Expedition observed a new species of woodpecker he called a “black woodpecker.”

Five years later, the bird was sketched by ornithologist Alexander Wilson who named it Picus torquatus, or “woodpecker with a necklace.” The common name of the bird became Lewis’s woodpecker, in honor of the explorer. 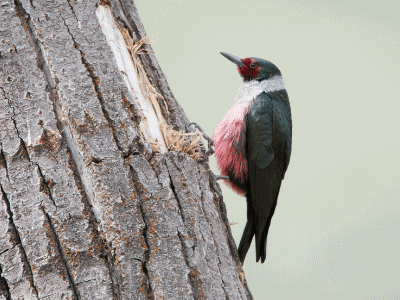 Lewis’s woodpecker is one of just four species of woodpeckers in which both males and females have identical plumage.

It’s also unusual in that it requires an open range for feeding and nesting. It eats adult flying insects, nuts, and fruit rather than insect larvae living in dead trees. It uses tall trees, telephone poles, and other high perches to survey the landscape and locate its prey.

There are just 69,000 Lewis’s woodpeckers left in the wild. The National Breeding Bird Survey says that their numbers have declined by more than 70% over the last 50 years. 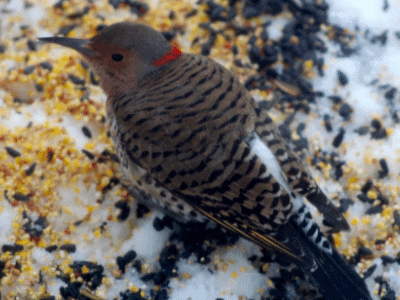 These gray and brown spotted birds use their decurved beaks to dig ants out of the ground for their food, almost never feeding on trees. Their feet are almost always in a zygodactyl, perching position, rather than with toes spread out to cling to the bark.

Northern flickers are found over all of Canada, the United States, and Mexico, except for the Bering Sea coast and areas of Canada north of the Arctic Circle. They migrate south and north in groups of up to 1,000 birds, with a few males going ahead.

There are nearly 10,000,000 northern flickers in the wild, but their numbers are decreasing.

Nutall’s woodpecker lives in the oak forests of California but feeds on beetles, termites, and ants rather than acorns. 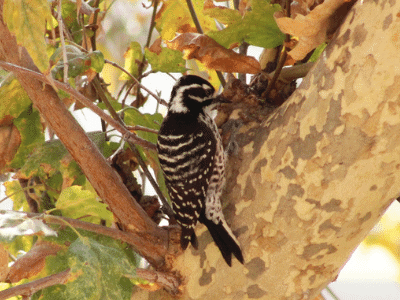 Nutall’s woodpeckers look a lot like Ladder-backed woodpeckers, except that they have more black on their faces and narrower wing markings. Their tail feathers are spotted black rather than barred black as with ladder-backs.

Nutall’s woodpecker has a very limited range in coastal California and Baja California. It numbers 650,000 in the wild, and its populations are increasing due to successful conservation efforts.

Largest of all the woodpeckers confirmed to still exist (the ivory-billed woodpecker was larger), a pileated woodpecker sometimes splits a tree in half with its vigorous pecking in search of carpenter ants. 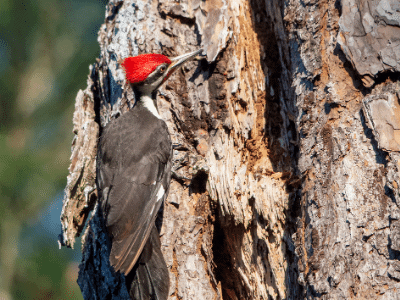 A single pair of pileated woodpeckers command a range of about a mile (1.6 km) in every direction from their nest, and the species is vigorous enough to be found in mature forests from the Yukon to Southern California and from Nova Scotia to the Florida Keys.

Pileated woodpeckers leave virtual caves in mature trees that later become homes for other animals such as bats.

You are more likely to hear a pileated woodpecker than to see one.

If you do see a pileated woodpecker, you’ll see a single-color bird when it’s perched, and you’ll notice the only crest on any woodpecker in North America (other than the ivory-billed woodpecker, believed to be extinct).

There are 2,600,000 pileated woodpeckers in North America, and their numbers are increasing. 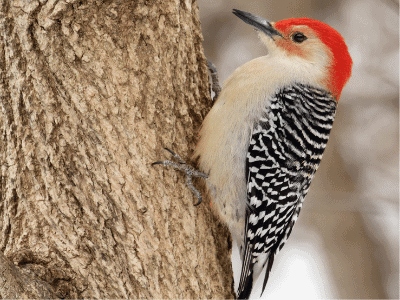 Red-bellied woodpeckers are aggressive hunters. They eat mice, small snakes, small fish, lizards, and nestlings of other birds. They fill their cheeks with seeds at bird feeding stations.

They crack nuts against hard surfaces to make them easier to eat.

These relatively rare birds live in family groups in stands of longleaf pine. 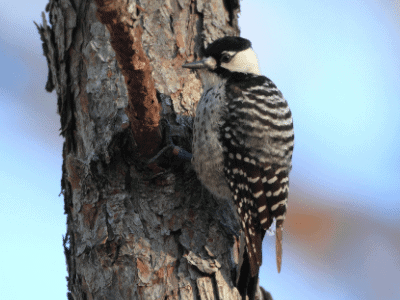 As longleaf pine forests disappear, their numbers are decreasing. There are just 15,000 of these woodpeckers left in North America.

These forest birds of the American East Coast store nuts, eat fruit and catch bugs on the fly. 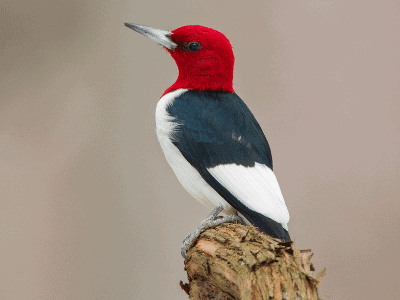 These West Coast birds peel away bark to look for insects rather than drilling holes into trees. 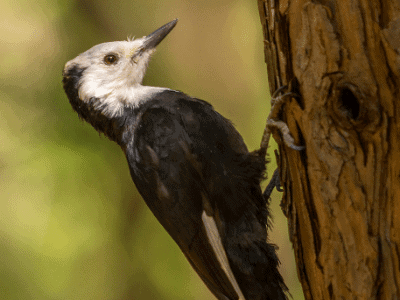 The 200,000 birds of this species left in the wild mostly live in pine forests in Oregon.

So these are the different types of woodpeckers that you can find in North America and around the world. If you want to hear the call of some of the birds, I recommend you check out the Xeno Canto website.