Bats are extremely important to the ecosystems they share. Bats eat mosquitoes and other noxious insects. They pollinate plants.

But bats have immune systems that nurture viral diseases that can be deadly to humans.

It’s important to keep bats and people separated, although getting rid of bats can be done in simple, humane ways that don’t harm these flying mammals.

In this article, we’ll share 13 ways to get rid of bats.

Bats are nocturnal creatures. They leave their roosts at night to hunt for food and only return shortly before dawn to rest through the day.

Bats prefer caves, but when they can’t find a cave, your attic, your storage shed, your garage, or any dark, suitably warm room in your home will do. Keep bats out of your home by sealing the openings they can use to enter.

How would you know you need to seal your attic or some other structure to prevent bats from entering?

It’s important to prevent your attic or outbuilding from becoming a bat cave.

Don’t put out poisons. It’s unkind to the bat, and the bat might get even by dying and decaying someplace you can’t remove them.

Instead, make sure someone climbs into your attic to make sure the openings around utility connections are sealed, the ventilation pipes for your bathroom open above your roof rather than in your attic, and any openings that are necessary for airflow are screened.

Do this inspection and repair during the evening or at night, so you won’t trap bats inside.

Do the same for your garage, your chimney, the eaves of your roof, and outbuildings.

Then make sure your doors close all the way, so you don’t leave room for bats to fly into your main living area to hide in closets and under the bed.

Bat nets cover holes that you don’t have time or money to repair. 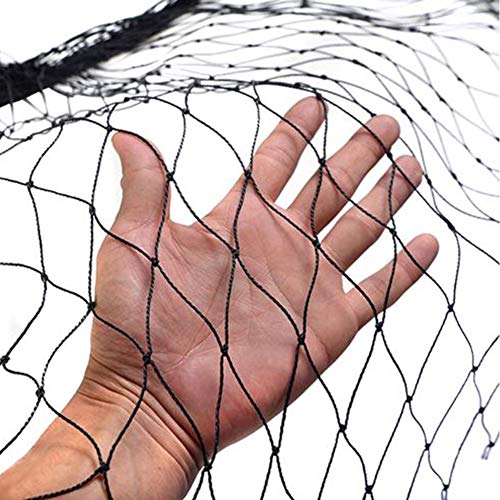 They have the added advantage of being something you can install during the day, while bats are in your house.

When you have identified the places bats are getting into a building, take a piece of bat netting above and along the sides of the entryway, leaving the bottom of the fabric loose.

Bats naturally swoop down on takeoff when they leave at dusk to forage for food. Because they return to their roosts from a higher elevation, they will be confused by the netting and won’t be able to find their way back in.

There is netting for smaller openings called a bat cone. Point the tip of the cone downward when you tack it over a hole to keep bats from flying back in. 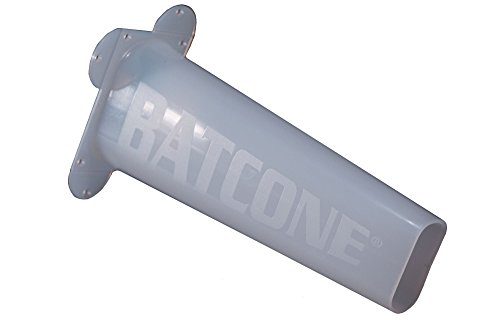 The first few mornings after you have put up bat netting or bat cones, bats may gather around your house trying to figure out how to get back in.

This is a critical time for making sure other entries are also blocked, and you don’t leave doors open as you go about your business in the morning.

In a few days, they will find another home.

On rare occasions, a bat will get tangled in the bat net. If this happens, call your local wildlife control. Don’t try to remove the bat yourself.

Put out a natural bat repellant

Most humans like the smells of peppermint and spearmint essential oils. Most bats can’t stand them.

Applying essential oils of peppermint and/or spearmint to cracks, crevices, hollow spaces, and potential entry points will deter bats from coming in a roosting.

You could even set out a battery-powered diffuser in your attic or in a storage shed for longer-acting discouragement of entry by bats.

There are products like Bonide Bat Magic that treat up to 150 square feet (16 square meters) of floor space that you can just tack to the wall and leave.

This and similar products are biodegradable. They don’t harm bats, and they smell good to people. They just encourage bats to find a different home.

Just be aware that if you already have a major infestation of bats, aromatherapy won’t be enough to overcome the bats issue and drive the colony away.

Provide Bats with a home where you want them to stay

You’re probably familiar with birdhouses, but did you know that there are also bat houses? 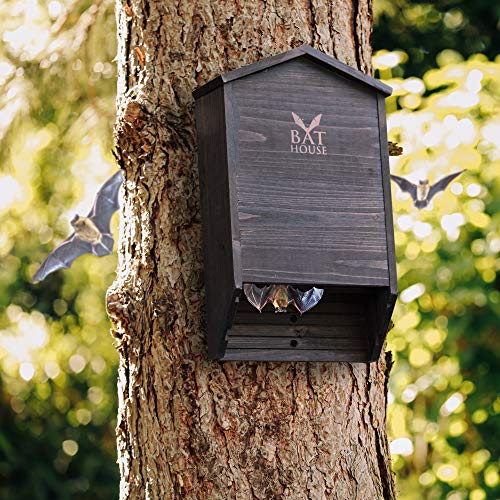 The main difference between a birdhouse and a bat house is that birds need a wide space for building a nest, while bats need a narrow space where they can leave their babies better defended.

Interiors with bark-like finishes are easier for bats to climb so they can hang upside down during the day.

Bat houses can hold as many as 100 bats in a location away from your house.

Don’t install a bat house in a tree. Trees make ladders for predators to get to bats. Instead, put the bat house on a pole or a concrete structure at least 20 feet (6 meters) from the nearest tree to keep the bats safe.

The bottom of the bat house should be at least 15 feet (5 meters) above ground and 20 feet (6 meters) from branches or shrubbery. Your bats will repay you by eating mosquitoes and garden pests.

If your garden or backyard is an all-you-can-eat buffet of beetles, caterpillars, and mosquitoes, it will attract bats.

If you want fewer bats, do something to control bugs. Organic pest control methods, particularly those that involve a product called Bt, and encouraging the presence of insect-eating birds, such as martins, will also reduce your bat problem.

If you live in the US territories of Guam, American Samoa, or the Northern Marianas, you’re familiar with fruit bats.

If you want to discourage these winged visitors, place netting over your fruit trees. But leave some fruit to share at the edges of your property.

Annoy your bats with ultrasound

Bats navigate in the dark through a process called echolocation.

Bats don’t like anything that interferes with their navigation system. There are sound-emitting devices that emit noise in the range of human hearing that surprise and scare bats — and people. 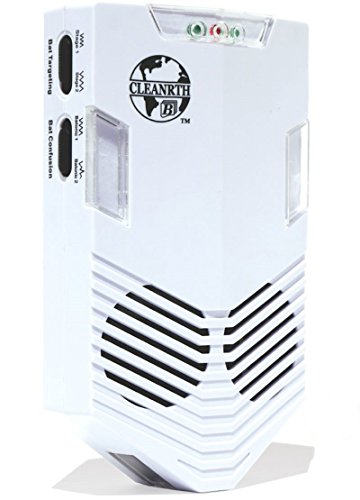 There are also devices that emit a high-frequency sound that humans can’t hear but keep bats awake.

Simply plug in the ultrasound generator, preferably at least six inches (15 cm) and up to three feet (about a meter) above the floor, and let the device do its work.

Bats are fussy about temperature. Even though they are mammals, and warm-blooded, they prefer temperatures above 80 degrees Fahrenheit (26-27 degrees Celsius).

Nursing bats like the air temperature even hotter, around 100 degrees Fahrenheit (37 degrees Celsius).

You can air condition your unintended bat habitat to make it too chilly for your guests. Or it’s easier to heat indoor habitat above the bats’ acceptable range.

Make your attic dry and hot. Keep up the heat for several days, checking every few hours to make sure you don’t create a fire hazard.

You won’t need to heat your attic at night when the bats aren’t in your home. It should take two or three days for bats to decide to find somewhere to live.

Are you familiar with the odor of mothballs? Their smell is due to the release of a chemical called naphthalene, which evaporates from the ball slowly over time. 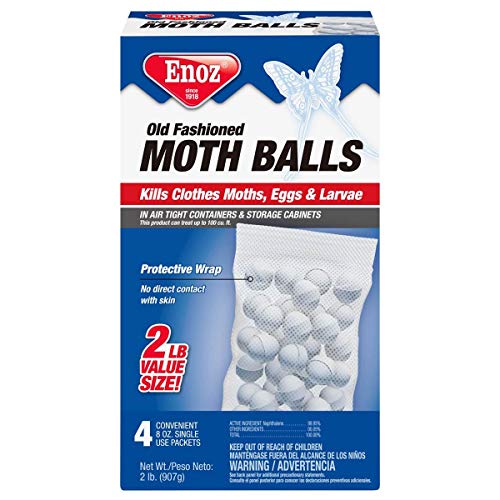 Naphthalene is toxic to moths and silverfish. It’s merely offensive to bats. Mothballs may make bats dizzy, but they won’t kill them, and they will encourage the bats to go somewhere else.

Keep in mind that mothballs are more useful for expelling an existing bat colony than for keeping new bats out. You still need to plug holes or put up nets and cones.

When bats come in after a long night of hunting, they want to rest. They can’t sleep if the lights are on.

Place a mirror on an incline on the floor of your attic, pointed toward the ceiling where bats spend the day.

Place a strobe light (or a regular light, if you can’t afford a strobe light) where it shines into the mirror, increasing the light on the bats.

You can increase the effectiveness of mirrors by hanging pieces of crumpled aluminum foil on strings from the ceiling and turning on a fan.

The foil will move back and forth and keep the bats awake.

Disinfect your attic with phenol

Phenol is an old-timey disinfectant that once was used in surgical theaters and hospital rooms.

It has an odor humans find unpleasant, but bats find unbearable.

Buy a spray can of a phenol-based disinfectant, and spray away. Repeat the application every two or three days to keep bats from coming back.

And when all else fails, call a professional

Sometimes you can’t get rid of bats no matter what you do. Professional pest control operators have the equipment and expertise to get rid of your bats.

It’s reasonable to expect a warranty on your pest control company’s work.

Professional pest removal can be expensive, but sometimes it’s worth the cost.

Frequently Asked Questions About Getting Rid of Bats

Here are FAQs that you may have when thinking of getting rids of the bats.

Q. If bats are beneficial for the environment, why do I need to get rid of them?

A. It’s true that bats can eat as many as 600 mosquitoes per hour. This is enormously helpful for keeping mosquitoes under control. Over time, however, the floor under a bat roost becomes covered with their excrement, known as guano. Guano can incubate fungi, mold, and bacteria, and it becomes intensely odorous.

Q. What time of year are indoor bats most likely to be a problem?

A. Baby bats learn to fly in the spring. Just before the beginning of summer, you are most likely to have bats flying in your home by accident.

Q. Will bats ever go away on their own?

A. Most bats seek warmer climates in the winter. But if you provide them with warmth and they can find food, they have no reason to leave.

Q. What not to do when trying to get rid of bats?

A. Never try to trap bats in a cage. Bats usually live in colonies of up to 100, so caging just one bat isn’t going to do you a lot of good. And when you try to release bats back into the wild, you risk being bitten or catching a viral disease.

Q. Where will I find evidence of bats?

A. The prime places to look for bats include:

So these are some of the ways you can use to get rid of bats.

Hope you found this article useful.