Watching birds soar and hearing birds sing are the joys of backyard bird watching—during the day.

When noisy birds make a home in your attic or on flat surfaces on and around your home and chirp all night long, you may need to relocate them so you can get a good night’s sleep.

They use their ability to hear high and low frequencies to detect prey and to warn them of predators. But birds find some sounds irritating and just fly away.

How to Stop Birds from Chirping at Night?

In this article, we will give you 10 easy ways to keep noisy birds away without causing them harm, starting with how you can use sound to keep birds away.

Birds won’t hang around where they can hear gunshots.

Sonic cannons make them go away, too. These propane-powered devices generate a 130-decibel blast that will scare birds off properties as large as 10 acres (4 hectares). 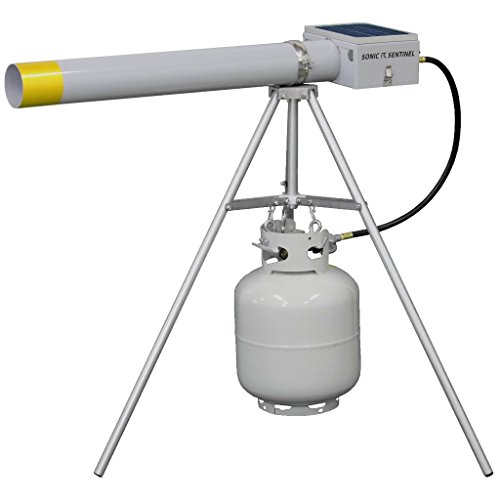 The problem with loud, explosive noises as a method of bird control is that they are usually illegal for private individuals, and, at the very least, your neighbors would object.

If you live out in the country, and your nearest neighbor is no closer than half a mile (about a kilometer) away, however, a sonic cannon may actually work for you.

The secret to success in using sonic cannons is making sure that they go off at irregular intervals.

If they fire on a regular schedule, birds will get used to them. Make sure your sonic cannon is programmed to go off at irregular intervals.

A sonic cannon with a one to ten minute setting might go off four minutes after it is activated, then go off again nine minutes later, and go off a third time just a minute later, and so on.

Sonic cannons are strictly for use in rural settings. But that doesn’t mean that urban homeowners can’t use sound to stop birds from chirping at night.

High-frequency sound generators emit some of the same pitches predator birds like owls use to locate their prey at night.

Since owls sometimes eat other birds, most noisy birds will scatter when they hear the sound of the high-frequency generators.

Humans can’t hear these frequencies, so they won’t interrupt your sleep or disturb your neighbors. If you use them all night, every night, however, birds may get used to them.

Ultrasonic bird repellers are very similar to high-frequency sound generators except that they are designed to get rid of a single species of bird. 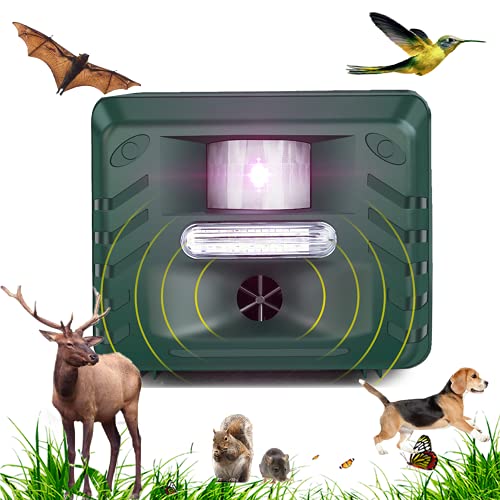 If you have a problem with mockingbirds chirping at night, for instance, you would be wasting your time trying a device designed for starlings.

These devices also will not disturb people.

Sonic generators produce a variety of audible sounds at random intervals to scare and entice birds to leave your property.

They may imitate the sound of a predator such as an owl or a cat, or they may play a mating call that would lead birds away from your house.

They may play a bird’s distress call, warning other birds to stay away. These devices have the advantage of variety, so birds do catch on to the ruse.

Many sonic generators are motion-activated, detecting birds even at night.

Be sure to point the motion detector in the direction from which birds approach, not where they stay, to keep them off your property.

What do you do when sound generators won’t keep noisy birds away?

Sound generators are the simplest solution for the annoying noise of chirping birds at night, but they aren’t your only option.

Laser light shows confuse birds and encourage them to fly away.

Birds that are not familiar with them will assume that they are dangerous and fly away.

To keep birds away from your house at night, all you need to do is to point the laser device toward the location where birds are staying at night, and set the timer for the lasers to start as soon as it is totally dark.

Most laser bird repellents only cover an area of about 12 square feet (a little more than a square meter), so you will need to aim the device in the middle of a problem area.

When all the previously mentioned methods of keeping birds away at night don’t work, the next step is to try physical barriers to keep birds away.

Bird netting can keep birds from roosting on nesting where they make problem sounds at night.

This is a method you use to prevent bird noises at night.

Once birds have built their nests, your best course of action is always to let them raise their young, and then hang bird netting over the area once the nest has been abandoned.

For most kinds of birds, except pigeons, federal and state laws don’t allow you to interfere with nesting.

Bird netting is effective, but it is not attractive. It can also interfere with your view through the windows to your backyard.

If you trap birds inside it, you will have to deal with dead, decaying, odorific bird bodies.

Wires strung over roosting and nesting sites, like eaves and ledges, can keep birds from using your home as an overnight rest stop.

You need to hang them an inch (2 or 3 cm) over the windowsill, ledge, or leave where they would roost for the night.

Simply running a wire directly over a flat surface does not do a lot of good.

But you don’t have to do the extra work of elevating a wire when you put down bird shock tape. 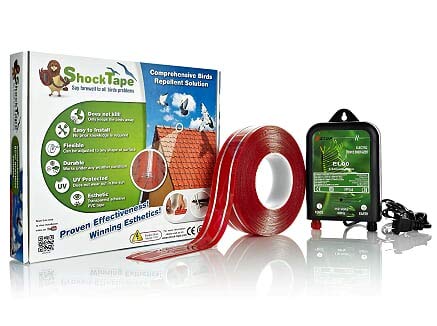 To use this method, you will need both a roll of shock tape and a shock tape charger. You apply bird shock tape the same way you use double-sided office tape.

Just peel off the paper backing to expose the side with the adhesive.

Make sure the tape is firmly attached to the surface you want to protect. Then connect the tape to the charger and turn it on.

When birds land on the shock tape, they get a mild charge that makes them fly away. Shock tape keeps birds from nesting on anything with a flat surface.

It is useful at the top of walls, on shingles, for protecting window sills, and for making gutters and pipes off limits to nighttime birds.

You need to be sure that you don’t put out shock tape where it can be found by children or pets.

Use shock tape where there isn’t a lot of foot traffic, since it stays on all day, not just at night.

There are some odors that birds can’t stand. One of them is grape juice.

To birds, it is annoyingly stinky. It stimulates their trigeminal nerves, giving them, for a few seconds, the avian equivalent of a migraine headache.

It isn’t just birds that can’t stand the smell of methyl anthranilate.

Scientists have discovered that it also drives off fruit flies. It even repels bacteria, so they do not form sticky films that hold them in place even after washing a surface with soap.

You can spray methyl anthranilate on your windows to keep birds from flying into the glass.

Be sure to dilute the product as directed on the label, and reapply it every three or four days or every time it rains.

The more exposed surfaces your house has, the more birds can use it for overnight lodging.

Bird spikes, however, can make landing and roosting or building a nest impossible.

Bird spikes don’t skewer a passing bird. They just make it impossible for a bird to perch on a flat surface.

Clear plastic spikes create a prickly surface where birds can’t stop and rest, sending them on their way to a destination away from your house.

Installing bird spikes is easy. Just measure the surface you want to protect, and buy a roll of bird spike tape of the same length.

Peel the adhesive backing off the back of the tape, and stick it in the middle of the flat surface.

Don’t place it too far back or too far forward, so you don’t give birds a place to land.

Once you have put down bird spikes, wash them with a power hose occasionally to remove accumulated debris.

How to Keep Pet Birds Quiet at Night

It isn’t something that bird owners like, but it is absolutely normal behavior.

Most pet birds are noisiest at dawn and dusk.

Most bird owners don’t have a big problem with noisy birds late in the afternoon, but birds that wake you up as the sun is coming up can be very disruptive early in the morning.

Whatever you do, don’t yell at your bird. Your bird will think “This is great! I am yelling and my human is yelling too! Let’s yell some more!”

It is best just to ignore noisy birds at dusk and dawn.

Leave one side of the cage that faces a wall uncovered so your bird will have fresh air throughout the night.

A. Sometimes birds that are normally active during daylight make noise at night to warn other birds of imminent danger.

Most often when diurnal birds are noisy at night, they are confused about the time of day.

Many birds begin singing and chattering at the first sign of daylight, before the sun actually rises.

Nightlights and lights connected to a motion sensor may cause birds to sing as if the sun were about to come up.

Q. What kinds of birds are noisiest at night?

A. Owls hunt at night. It is very rare for them to vocalize during the day.

Robins may be noisy at night if there is a lot of artificial light. If you want to keep the robins, turn off the lights.

Other birds that are often noisy at night include mockingbirds and whooperwills.

Q, How do I keep backyard chickens quiet at night?

A. The best way to keep backyard chickens quiet at night is not to have a rooster!

It also helps to make sure that the highest part of your chicken coop is at least a foot (30 cm) lower than your backyard fence, so your chickens are not disturbed by anything going on in your neighbor’s yard.

Smaller flocks are less likely to be noisy than larger flocks. You can place a radio tuned to a talk radio station turned down low and set on a timer in the coop with your chickens.

Some people who keep chickens report that chickens find the sound of a human voice reassuring.

The quietest breeds of chickens are:

Most of these breeds are easy to find. Get pure-bred chickens for the best results.

Q. I can’t stop my neighbor’s birds from chirping at night. What can I do?

A. Sometimes it helps to use white noise to block bird sounds, like running a fan all night. Or you may want to wear earplugs.

When all else fails, start sleeping in a different room of your house.